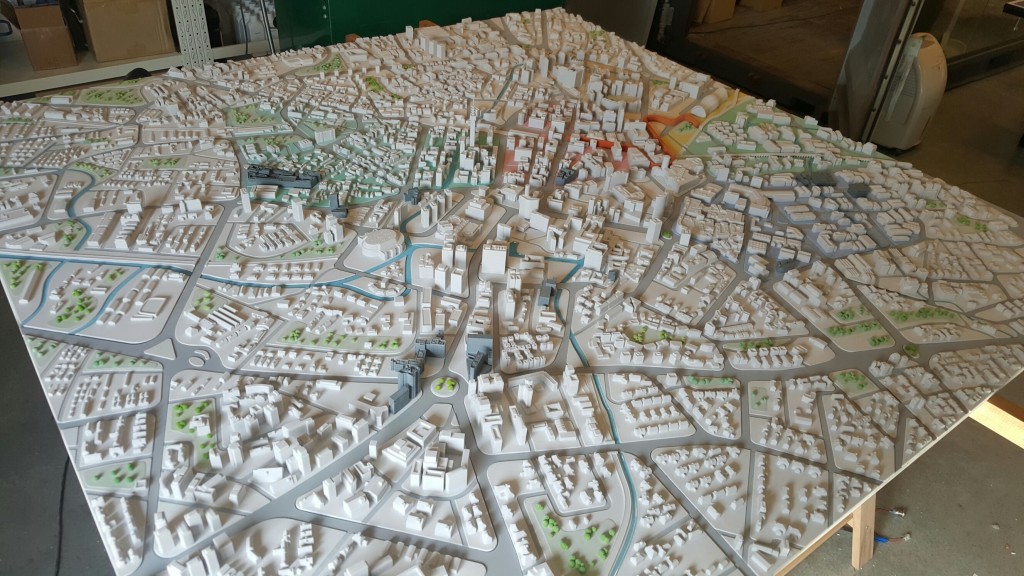 Generation 3D and Seven Capital 3D print Birmingham have finally completed their challenge of 3D printing the entire City of Birmingham. It is another step forward for 3D printing and showing its true potential to more companies in the construction and property development sector. The 2x2m model will reside in Seven Capital’s Headquarters in Dubai to demonstrate the key features of Birmingham. For more images click here.
“It was one of the more challenging but certainly very rewarding,” said Co-founder Dominic Wright “Our client Seven Capital wanted to showcase Birmingham as an up and coming city and highlight its key development features within a 3D Printed model,”. Co-founder and Technical Director Max Reynard explained “Our challenge first was to get a very accurate model of Birmingham designed and then decide on how to construct and assemble this mass of buildings efficiently and precisely”. The project was entirely printed on Generation 3D’s Projet860 Pro full-color 3D Printer.

This project is another milestone in real 3D printing and goes a long way in demonstrating its uses. It demonstrates 3D printing’s ability on large scale projects to deliver real value to a customer away from the ‘hype’ around future potential. This is Generation 3Ds 14th large-scale project for developers, architects, or government entities in 2016 further cementing the notion that 3D printing is gaining momentum when it comes to rivaling other manufacturing processes.

This was the first time Generation 3D and Seven Capital have collaborated and it was a valuable partnership by all accounts. John Treacy, International Sales Director for Seven Capital was quoted as saying “It is a huge success and we couldn’t be happier with the outcome”. Seven Capital are Birmingham’s largest property developer and continue to invest in highlighting Birmingham as an investment destination.

These ground-breaking projects are in line with the UAE government’s stance with Mohamed Al Gergawi, the Chairman UAE National Innovation Committee stating earlier in the year their desire to become “a global hub for innovation and 3D printing”. Generation 3D was invited earlier in the year to the CIO Majilis to discuss 3D printing with the UAE’s top 30 CIOs and talks have been progressing on how best to integrate 3D Printing into major private and public sector entities in the UAE to deliver a competitive advantage.

For any more information or questions on 3D printing please contact me at dominic@eneration3d.ae or https://generation3d.ae/contact/

MY CART
There are no products in the cart!
Subtotal
0.00 AED
Cart
Checkout
Continue Shopping